Not an iota of surprise that last Friday’s Forum, featuring remarks by the marvelous Wayne Koestenbaum and Cindi Katz, in conversation with the also marvelous Eric Dean Wilson on his wonderful(ly discomfiting) book After Cooling: On Freon, Global Warming, and the Terrible Cost of Cooling, was so full of lively intellect and joyous conversation. It isn’t just that these three are profoundly smart and erudite, which they are so much, it’s that they’re present and engaged to work and world and collegiality in all the ways that in fact this book counsels is necessary to get us through and thriving despite the state of the planet. Perhaps it was all this combined with the fact that this was a first, small foray into gathering in person again (with chocolate, of course) that I felt so strongly I could’ve listened to them speak for hours and days on end. I can’t do justice to the immense vitality Wayne gave to minty-ness and zeal in the course of his engagements with Eric’s work/knowledge/artistry/craft/accomplishment/everything, but I share them out again here in the knowledge that your imagination will take them up as categories of revelry and wonder and scholarly-artistic delight! My thanks to all of them, and to all who attended on zoom (and in person, too!) for rolling with the clumsiness of the format. Also, I got to take pictures and update at long last the program flickr album! (As always, please be extra thoughtful in engaging with/sharing/circulating images from this album.)

It turns out that this event was the last of the “regular” Friday Forums for us for this year! We have (at long last!) spring break coming up, starting this Friday, followed by what will be a fantastic ESA conference on 29 April, and then we’ll round out the year with the open executive meeting and awards and prizes and Revels in May! Time has been so weird these past several years; it seems now to be barreling forward. I know even as we dip toes into gathering together in person, the COVID numbers are ticking up again and things could shift at any time. Just, grab what joy there is to be found in the midst of everything, right?

Unless things pop up in the midst, I’ll be in touch again in this format after break — so, in two weeks’ time. In the meantime and as ever, offering gratitude for your (minty, zealous, zesty) company in the thick of it all —

This site uses Akismet to reduce spam. Learn how your comment data is processed.

spaces of the English program diaspora 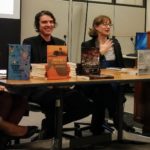 Except where otherwise noted, content on this site is licensed under a Creative Commons CC0 1.0 Universal Public Domain Dedication license.

%d bloggers like this:
Need help with the Commons? Visit our
help page Send us a message

Built with WordPress Protected by Akismet Powered by CUNY